Todoist is a simple yet powerful to-do list app that can help anyone get organized and achieve peace-of-mind, no matter where they are or what device they use. From planning large scale projects to simply remembering to pay the rent, Todoist helps get things out of your head and into your to-do list. Trusted by 10+ million people and praised as a life-changing app by The Guardian, USA Today, the New York Times, The Wall Street Journal, Forbes, Lifehacker and more.

Todoist has a free version and offers a free trial. Todoist paid version starts at US$36.00. 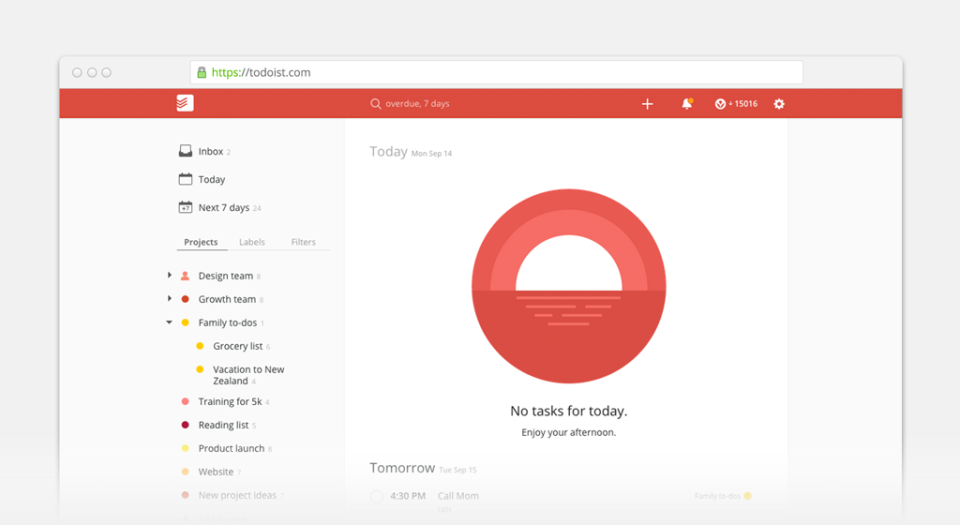 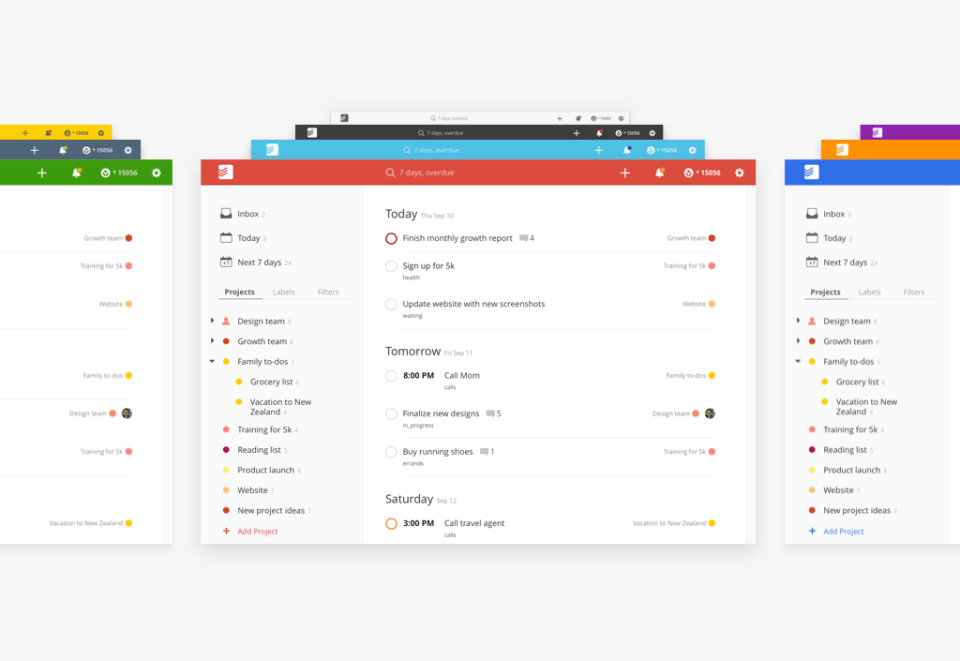 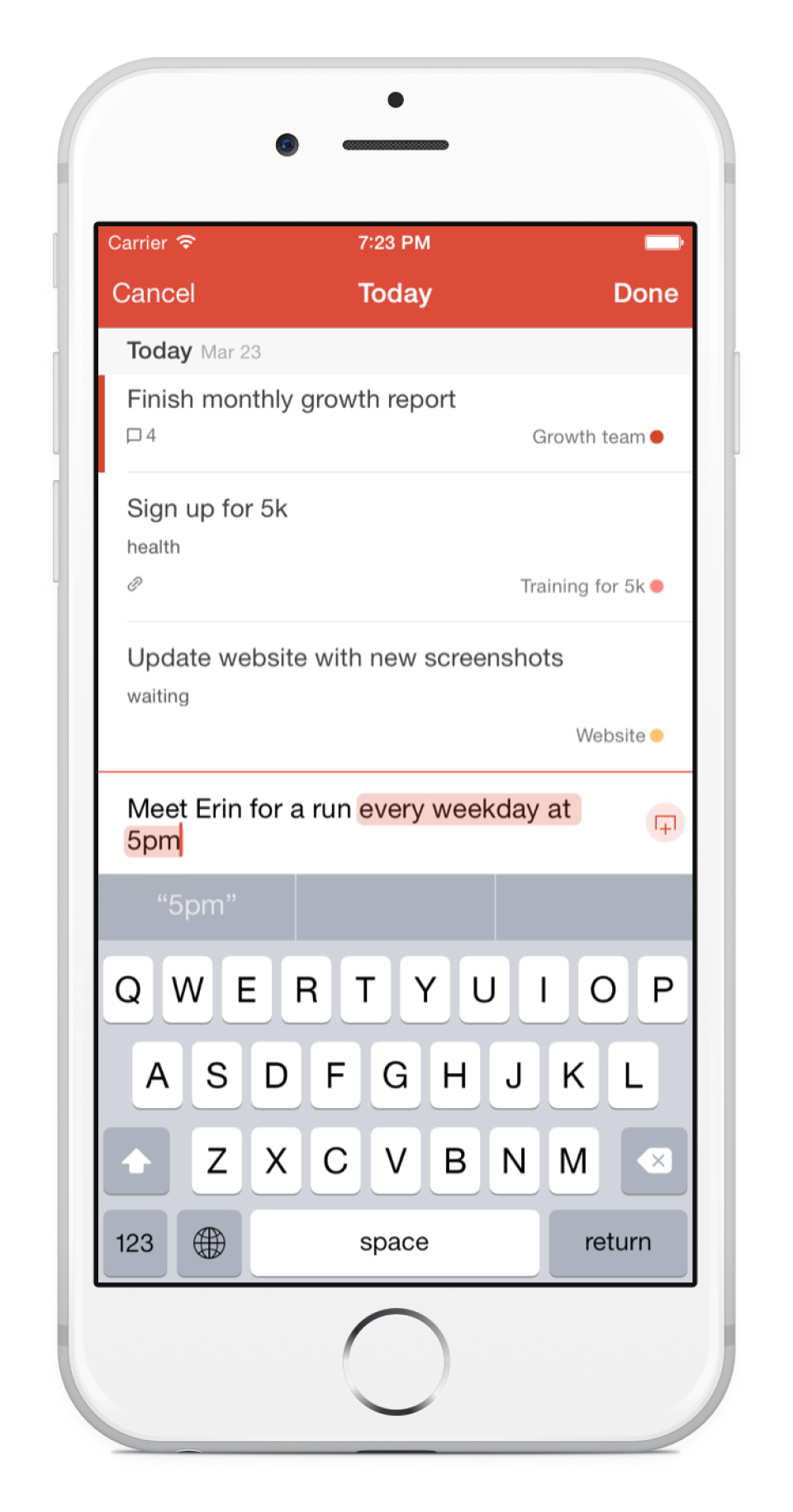 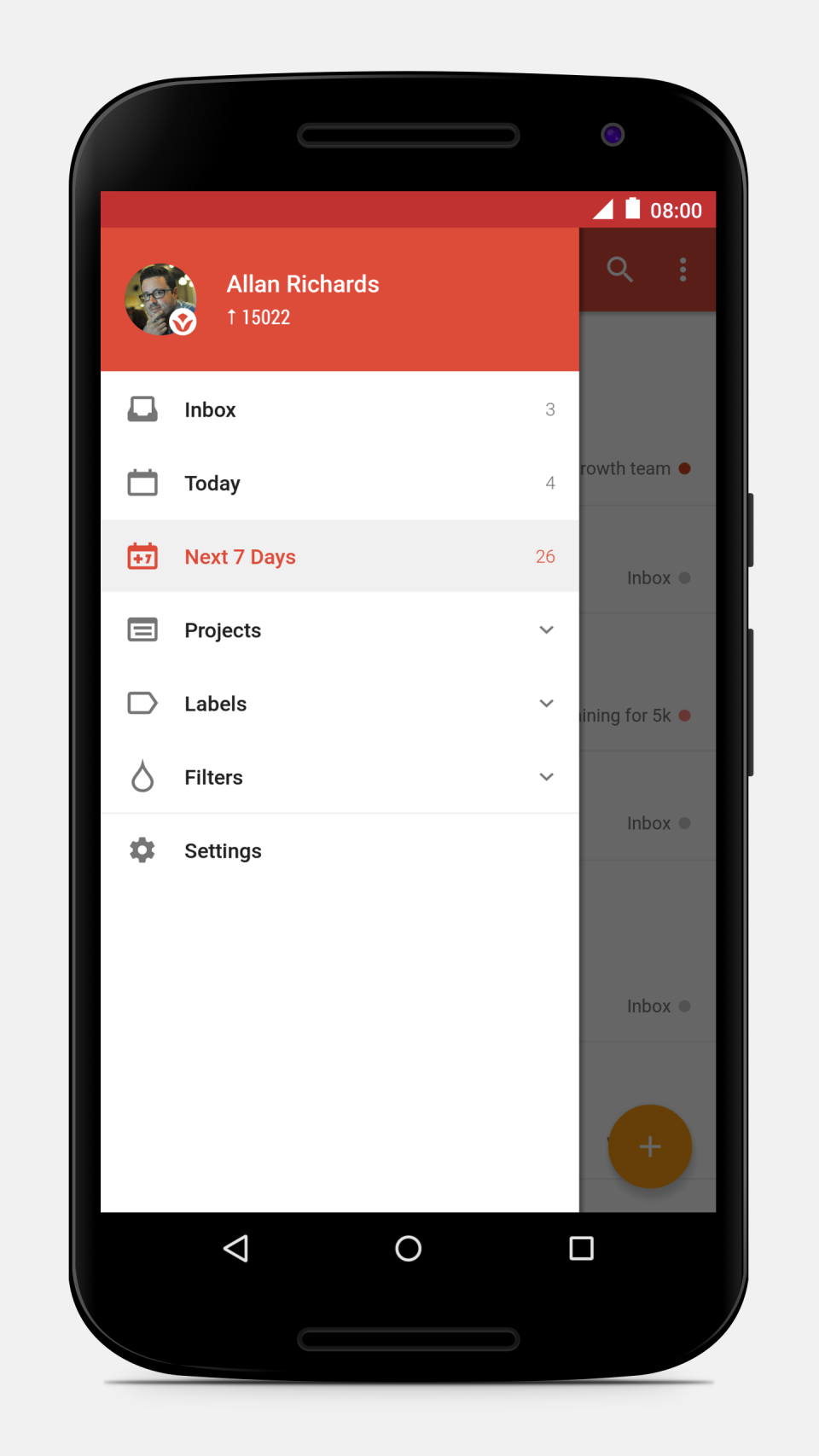 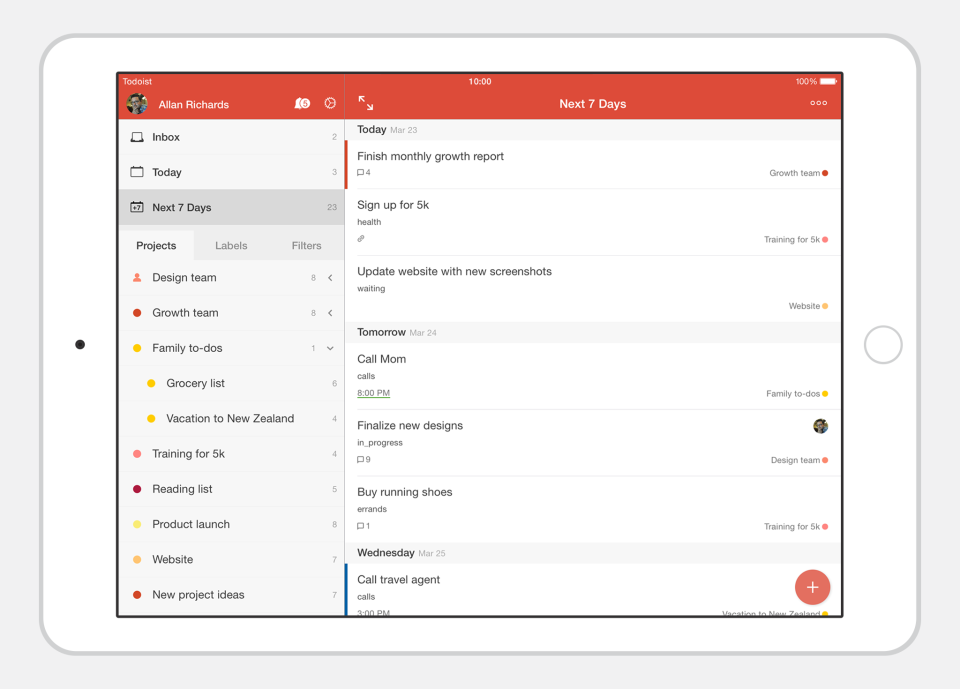 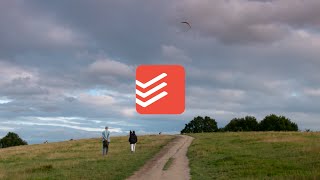 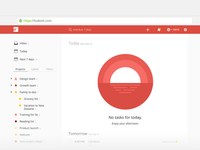 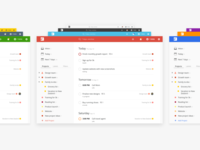 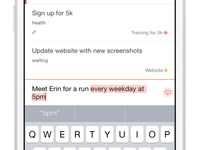 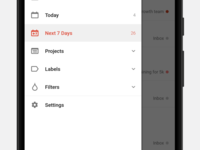 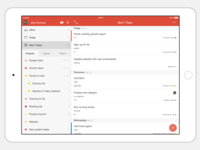 Take on your biggest projects and goals with Todoist's smartest features.

4.5/5 (17,313)
A visual collaboration tool that creates a shared perspective for your team on any project in a fun, flexible, and rewarding way.
View Profile See Comparison

4.7/5 (2,026)
ClickUp is the future of work - it's one app to replace them all. ClickUp is the #1 fastest growing productivity app in 2020.
Learn more about ClickUp
Visit Website See Comparison

4.6/5 (2,112)
monday.com is a cloud Work OS, where teams run their projects and everyday work, whether they are in the office, home or on-the-go.
Learn more about monday.com
Visit Website See Comparison

"Keeps Us Organized and On Task"

Comments: Todoist has been a game-changer for us. Its ease of use and interactive feedback helps us stay focused and achieve goals. They continue to work to improve it and a recent update has made using the app even easier. We are never without it when on-site or in the workroom.

Pros: We are theatre costumers who costume 12-14 shows a year. We use Todoist to keep track of all actors and their various costumes needed and the tasks required to complete those costumes. We love how easy it is to add new tasks to an existing one and how flexible each task can be. We can add a due date, assign a team member, and use labels to let us know what needs to be done or where it needs to be retrieved or bought from. It celebrates your productivity and emails you if a task is overdue as well as a report of how you did for the week. We can always tell if we did not use Todoist as faithfully as we should have during a project and in meetings the response to "How do we stay on task and organized?" is always "Remember to update and use Todoist!"

Cons: There is a 300 task limit to every project and we can easily hit that when we are first starting out and getting everything laid out for a show. It would also be nice to add an entire team to a project instead of individuals one at a time.

Owner
Marketing & Advertising, Self Employed
Used the Software for: 2+ years

"Works really well until I had too many tasks and then...overwhelm!"

Comments: I really like the interace and ease of use, it's one of my favorite apps in terms of the UI. It's a really quick setup, the fonts are clean and easy to read, the tags and projects are colored nicely, it just wasn't the app that helped me actually get things done.

Pros: While I was using this software, I really liked the sleek and modern interface to add new tasks. It was quick, easy, and the UI was awesome. I wish all task management apps had an UI like Todoist. The tagging feature was also super quick to add, which saves me time adding tasks. The feature to reschedule tasks I didn't do based on the load for my week was good, not as good as Skedpal (which is why I switched) but better than I've seen in other task managemetn apps I've tried and used. I also really liked the minimalism of the screen, I never felt that it was too clunky or too many options being displayed at once and overwhelming me.

Cons: The reason I switched is because I had so many tasks added in I became overwhelmed. This isn't necessarily the apps fault, I should add time in my calendar to do a weekly review, etc... but it just wasn't happening. I switched to SkedPal because it schedules the tasks for me on my calendar, ensuring I get them done. With ToDoist, if something didn't get done, I would have an overdue task, and then need to schedule it into my calendar myself and spend time figuring out what time slot, etc..., then go back to Todoist if the time didn't work out, etc... it wasn't flexible enough to auto schedule and place it on my calendar with the option to roll over to the next day if not completed. (At least at the time that I used it). If it's not on my calendar, it doesn't get done because other things will fill my calendar and then I'm out of time and my Todoist tasks are not completed.

"Easy To Use, Not So Easy To Organice"

Comments: The founder of the company really likes it to keep track of what everyone is doing so I've been using it for the last 5 months (since I started in this company).
But anyway, I actually keep using the Notes App on Mac which is really similar to Todoist but I can keep my tasks private - which is something I wish I could do on Todoist, not sure if there is a way already but it's not very clear who can see what.

Pros: Me and my team really like how easy to use it is.
It helps keeping track of what needs o be done and lets other people know what's been completed.
It doesn't over complicate things and it's really good that you can have it on your phone and get updates on notifications.

Cons: I get that keeping it simple must be the main idea behind this app. However, I'd appreciate if some hierarchy could be applied when organising the tasks.
The way to organise projects on the left part could be, for example, group into folders so once a project is finished you could, for example, move it to an archive folder. All the Karma points system and the notifications is a bit confusing or just not clear enough. Is it just to cheer you up when you've completed many tasks or has it got any actual purpose? But the most important: I wish tasks wouldn’t disappear from my inbox right when I complete them.
I wish I could still see them (maybe in a lighter grey colour) so I see what I've completed and then I could manually move them into a project folder when I don't want to see them anymore. Also, I'd appreciate if some type of colour coding could be applied in some way.

"The Todo app I've been looking for!"

Comments: Been looking for a todo app which has syncing and multi-platform support and this comes out trumps. I can manage my work as well as personal tasks, schedule them, tag them. Coupled with PomoDone app I can timebox the tasks which is a great combo

Pros: Multi-device, syncing, can have hierarchies of tasks, can tag tasks, filter the easily and save filter searches. Android and web app is brilliant in particular

Cons: Reminders on Android could be improved, many of my tasks get swallowed up by other tasks and I miss reminders, being able to address stagnant tasks (ones I keep postponing I have ADHD so it happens a lot), Google Home app could be improved it's annoying to keep asking to talk to todoist instead of adding a task directly, also you can't schedule tasks in Todoist

"Todoist: Where My Professional and Personal Lives Meet"

Comments: Todoist is reliable, simple and collaborative. It's less glitchy than other options, and has streamlined my life so now I can spend more time knocking out my tasks and less time prioritizing work and personal tasks through multiple different systems.

Pros: The Projects Feature is the absolute best part of Todoist! I was working between a few different programs (Outlook, Google Tasks, Google Notes, Smartsheet and Evernote), and needed one central place to keep notes and to-do lists for my personal and professional life. The collaboration tools allow me and my coworkers to share notes and to-do lists on joint projects, and me and and my husband to share home renovation punch lists and store to-buy lists, all in one central place. My life feels so much more streamlined since making the switch!

Cons: Since I've worked with so many different programs, I do miss certain functionalities of other programs: the Gantt-style like Smartsheet offers, the ability to sync with my email as seamlessly as Google and Outlook, and task contingency so that not all "to-dos" are shown at once, but overall I landed on Todoist due to it's simple interface and introducing any of the those features would take away from that. The one thing I would change for new users is that it's simple, but not intuitive to schedule recurring tasks. I had to Google the answer, and while it's easy (simple typing "every Monday" after the task does the trick) it seems like putting an icon would have been a no-brainer.