Workplace skills, hiring, and productivity in a post-pandemic UK

The pandemic has brought new challenges to every workplace. Employees have had to adapt to home-working, a new economic and commercial climate, and the complexities of creating and maintaining a COVID-safe working environment.

In this article, we explore workplace productivity, including the skills and tools that UK employees are adopting during the pandemic.

Over 1,000 UK employees responded to the survey. Of these, 40% of respondents began working at home during the pandemic, while 53% continued to work at their main site.

Nearly half of respondents (46%) say they developed new skills during the pandemic. Of these, nearly half (22%) had training offered by their employer, while 2% received training from the government or local authority.

Basic digital skills were the most widely adopted, being reported by 37% of those who picked up a new skill. IT security came in second with 28%, followed by website and app development at 19%, then healthcare and wellbeing at 17%.

The results of the survey also revealed a demographic difference: Younger employees were more likely than older ones to acquire new skills.

New skills were reported by:

The rise in new skills seems to reflect the reality of more widespread remote working – even those employees who were not working from home have had to get to grips with video conferencing and collaboration software.

The hiring process is increasingly digital

The importance of continual development among today’s workforce is reflected in the fact that 36% say learning and development opportunities are a top-three factor when looking for a new job after the pandemic.

Despite the economic uncertainty leading to some caution among jobseekers (only 11% considered quitting their job during the pandemic), 25% have changed roles. This may be due to internal promotion or transfer, voluntarily taking a job at a new company, or enforced change due to redundancy. 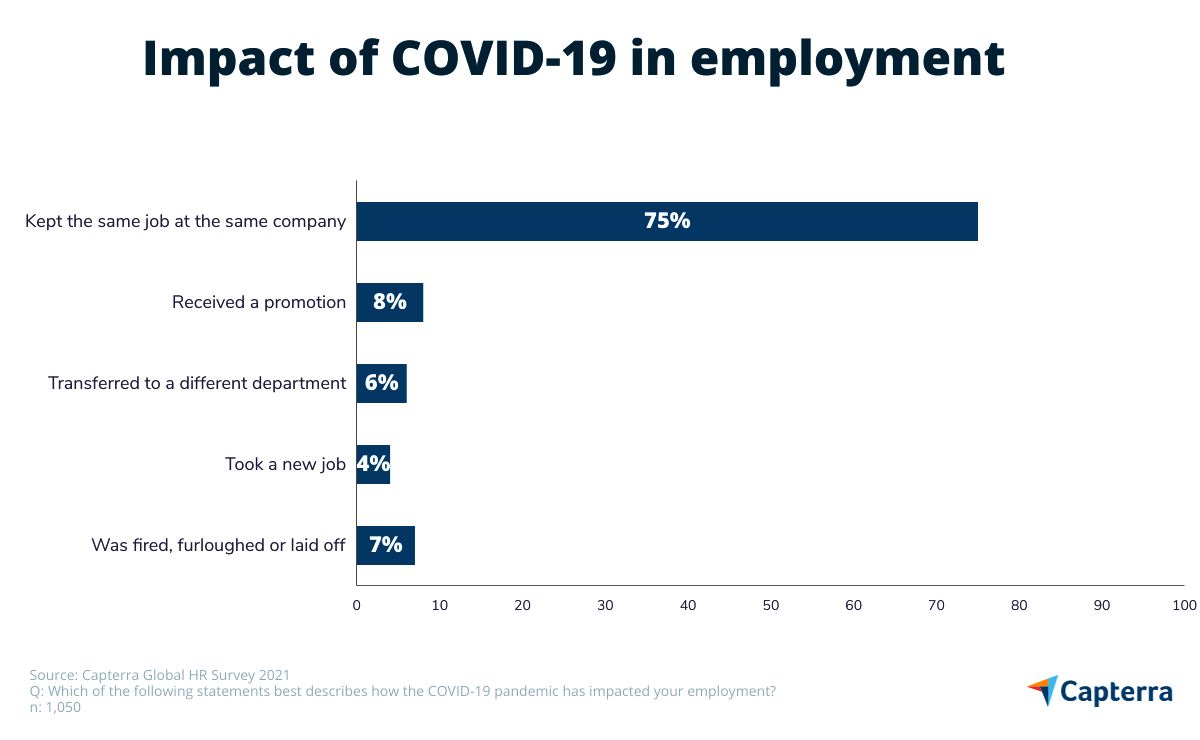 For those who did change jobs, the hiring process had at least some digital elements in 79% of cases. Common uses include the job application itself (56%), screening and interviewing (39%), and filling out new-hire paperwork (32%).

Given that 29% of UK employees plan to look for a new job once the pandemic is over, employers should be aware of this range of expectations when it comes to the hiring process. 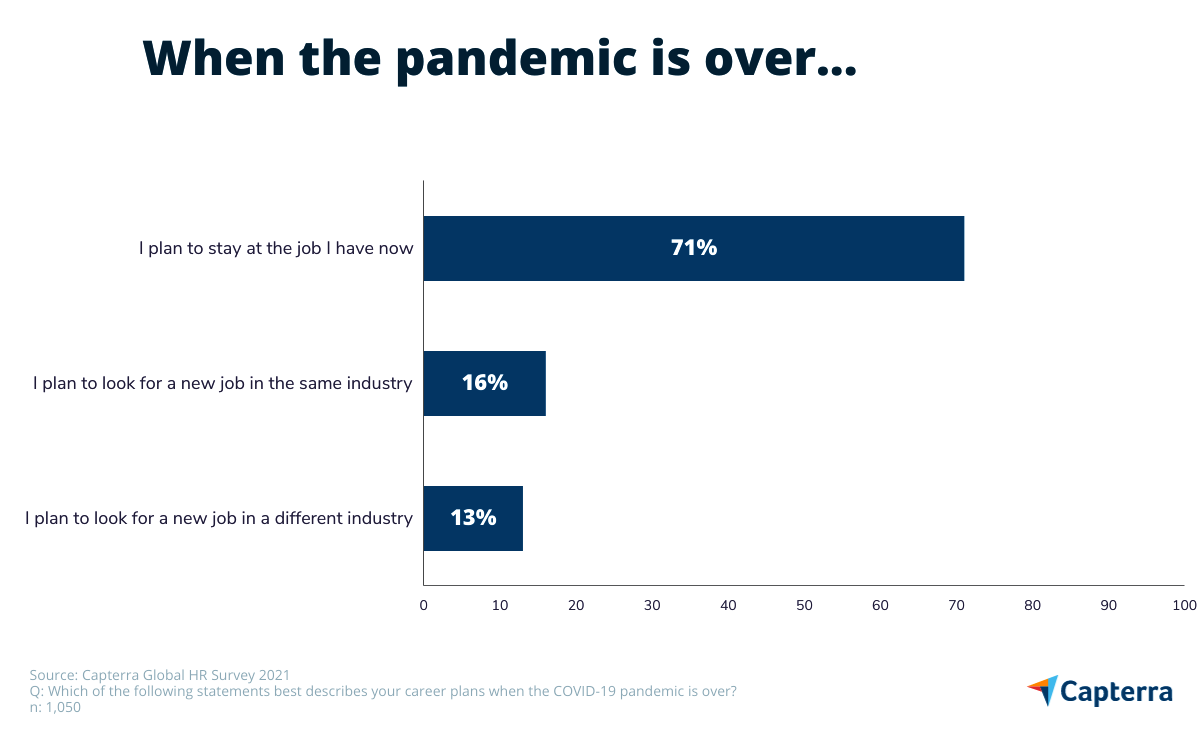 More than half feel overwhelmed by the number of digital tools

Employees in the UK have widely adopted digital tools in the workplace. Respondents use some type of software to plan their working day or set to-do lists, 70% use file-sharing systems, and 78% use online communication tools such as videoconferencing or internal chat. In most cases, employees have several different tools for one task area. For example, 39% use two or more communication tools (and 3% use more than five), while 30% use two or more organisation tools such as to-do lists or planners. 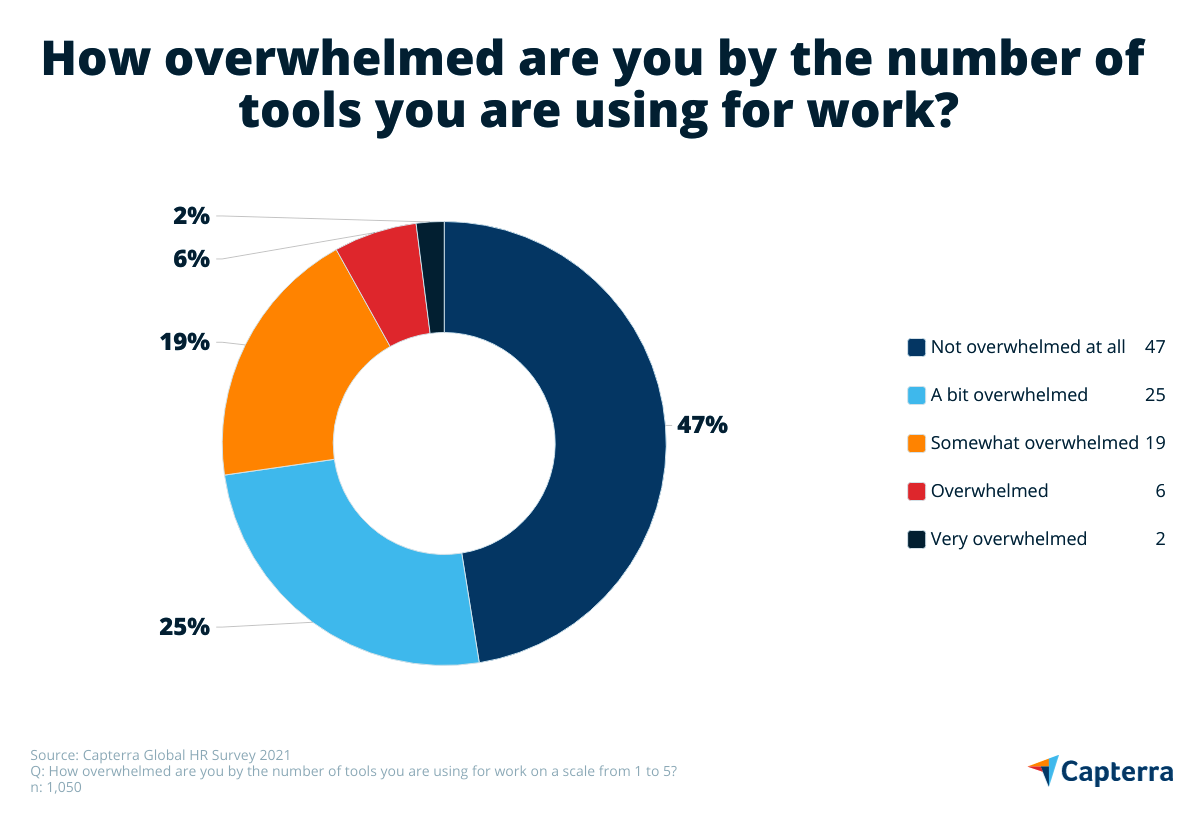 The proliferation of digital tools in the workplace is taking its toll. More than half (53%) feel overwhelmed (from “a bit” to “very”) by the number of tools they use for work. Interestingly, older employees are less likely to report this than younger ones. 77% of 18–25-year-olds say they feel overwhelmed compared with just 32% of employees in the oldest age bracket (56–65 years), with a steady progression throughout the intermediary age groups.

The pandemic has caused a spike in cyberattacks, with hackers capitalising on the disruption and uncertainty to take advantage of unsuspecting victims. In the rush to enable home working, many employers deprioritised security, allowing their devices and data to leave the corporate network as employees logged on from less secure home networks.

28% of respondents who acquired new skills during the pandemic did so in the area of IT security. Despite this, 39% of UK employees claim to use no cybersecurity tools. This may be underreporting, given that many tools are administered by employees and effectively function silently. However, it does show a potential lack of awareness of the risks that organisations face and how to implement the necessary protection.

Digital tools are designed to make our lives easier, but do they make a difference when it comes to remote working?

When the home is the new workplace, productivity is harder for employers to monitor. Despite some studies showing an improvement in output, employees themselves report things differently. Our survey shows that 37% of employees who began working at home during the pandemic feel less productive versus 33% who feel that their productivity has improved.

The main reason given is “too many distractions” (reported by 52% of those feeling less productive). On top of this, new home workers rate many aspects of their job as being better at the work site. Notably, when it comes to productivity, 66% say that their work setup is better, and 69% say they have more opportunities to collaborate. 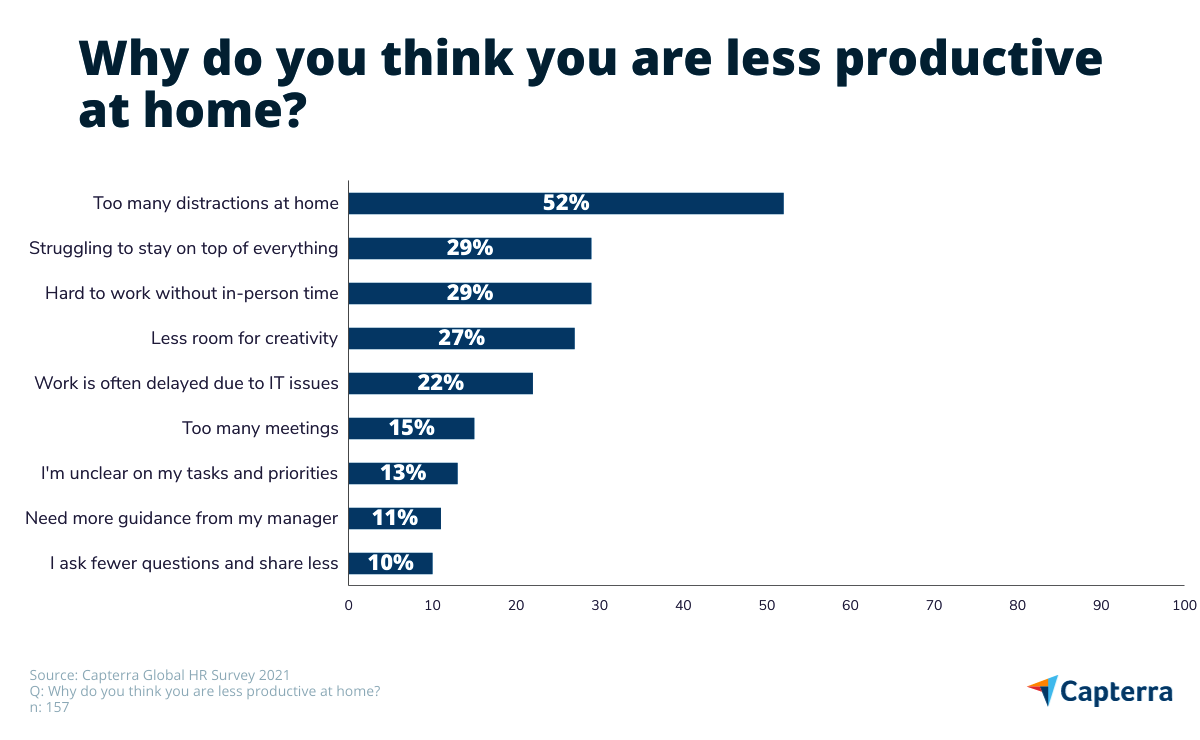 These opinions are reflected in workers’ assessments of their productivity (or lack thereof) when working from home. 29% say that it’s hard to work effectively without in-person time with their manager and coworkers, while 22% say that their work is often delayed due to IT problems.

Once remote working is no longer a necessity, employers should bear in mind the desire of employees to work at home as well as their need for adequate tools to remain productive. This is a delicate balance, which won’t be the same for everyone.

In the UK 1,050 employees aged 18–65 responded to our survey—26% of whom work part-time. 70% worked in an office environment prior to the pandemic, and none were self-employed.

We surveyed workers at small businesses with 2-500 employees in the following countries:

The responses are a representative sample (by age and gender) of each country’s population. We worded the questions to ensure that each respondent fully understood the meaning and the topic at hand.

Get the latest software and technology news from the UK

Thank you for signing up!

You will receive a welcome email shortly.